Once a spinning mill, then a business school, soon to be abandoned.

I don’t think I ever did a shoot there without getting lost somehow. Being a former spinning mill, the so-called Merino Building is a maze of confusing mezzanines, spiral staircases, back doors and outdated signposts. For close to 40 years, this was part of the Norwegian School of Economics. Now both students and staff are moving into a new building on the main campus, leaving the old mill behind. I was commissioned to make a series of pictures before all activity ceased – and immediately got carried away, spending several days loitering in the hallways, disturbing students in their exams and discussing the concept of Buddhist Economics and homemade Scream pastiches in the academic realm.

These are the Merino files.

The ethics professor. Knut Ims and his Scream pastiche.

Funny in Norwegian. Not untranslatable. But I’m lazy. 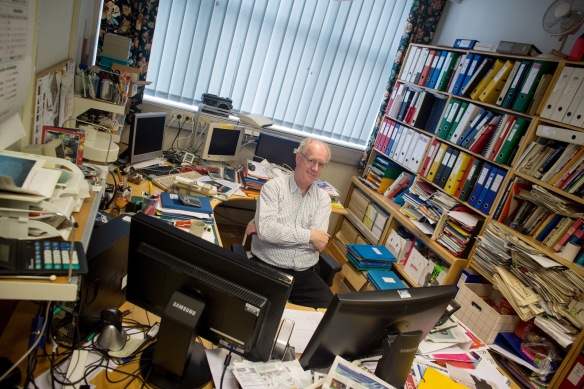 The manager. Nils Netteland in his office.