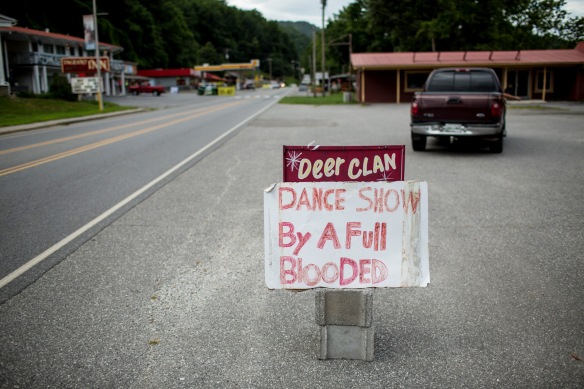 The town of Cherokee and the areas of Western North Carolina has been part of the homelands of the Cherokee people for centuries upon centuries. And yes – you still see clear signs of Indian presence in the town, even though most of the Cherokees in the 1830s were gathered, dispossessed and made to walk six months, 1,200 miles west, killing roughly one in four.

Depending on from which road you enter downtown Cherokee, the first thing you see is either a small stage with a scruffy looking bison and a sign promising Live Indian Shows, a 20 foot Cherokee statue advertising Indian Tattoos – or the Indian casino.

Despite my anti-gambling sensibilities, I suspect the casino might be one of the better thing to have happened to this town, in that tribal gambling at least generates a stream of revenue for tribe members. As of 2005, each member of the 13,000+ strong tribe received $8,000 from casino profits. Compared to the times before the casino opened in 1995, when most tribe members “were poor, almost totally dependent on the federal government for subsistence,” the opening of the casino meant dramatic improvements in everything from jobs to education to health care for the tribe, according to then chief Joyce Dugan. 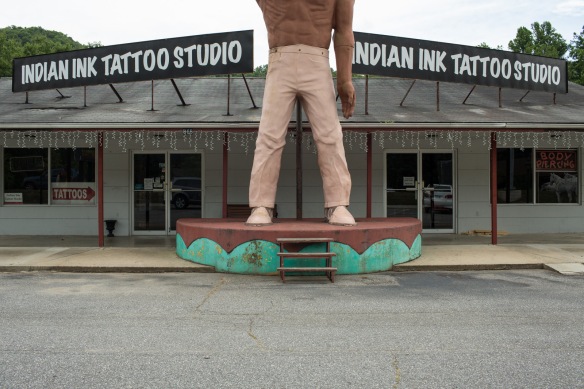 But for the rest of the town… Its current motto is “Trails of Legends and Adventures” – how about changing that to “Cringeworthy?”

Well, at least judging by its main street.

There is a museum, as well as a reconstructed Indian village, that might very well be decent and respectful attractions, but they weren’t open when I passed through town so I wouldn’t know. There is also a historic play on the story of the Cherokee Indians that’s been running daily for over 60 years, so obviously that’s got something going for itself.

But ah, yes, the main street. Here, tribal pride is a commodity, a photo-op, a souvenir – all in the most tasteless of manners. A sign saying “Dance show by a full blooded?” That is so very, very wrong. No disrespect to the tribal members who for whatever reason feel compelled to partake in this, but this has to make more people than me feel uncomfortable.

There are also the bear pens.

* The Place Where They Cried – Nu na da ul tsun yi – is the Cherokee expression for the events in 1838 in which they were forcibly removed from their lands in the Southeastern United States, resulting in the deaths of approximately 4,000 Cherokees. Today’s Eastern Band members are direct descendents of those who avoided the forced removal.

5 thoughts on “The Place Where They Cried*”