A set of ten facts* from the photographer’s very first encounter with America. 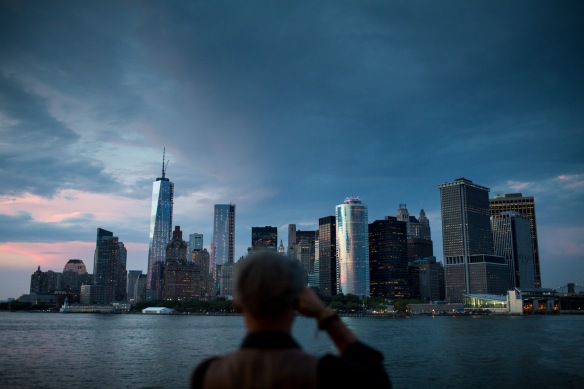 One block from Ground Zero

Fact one (pre-fact): Just south of Greenland’s Cape Farewell, at a height of 39,000 feet, an elderly gentleman watches the same inflight entertainment video of a skateboarding bulldog again and again. (This might be the best thing he ever saw.)

Fact two: Taxi driver Armando changes lanes on average 34 times a minute on his way from JFK to the Lower East Side. The Indian businessman in the Lincoln Town Car who didn’t drive like an arse but otherwise followed the same route arrived ahead of us. 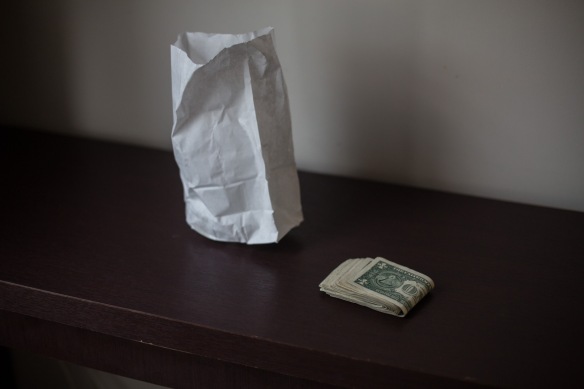 Fact three: WIthin two hours of arriving the US I had eaten a jelly donut in my underwear.

Fact four: The worst rower in the world is a large black woman in a rental boat on The Lake in Central Park. Her teenage daughter is not embarrassed at all, but lovingly supportive. (Hooray for the world.)

Fact six: You are very friendly – in a loud and very direct way. I’m a Northern European – as in proudly depressed and introvert. We need to work on our relationship. 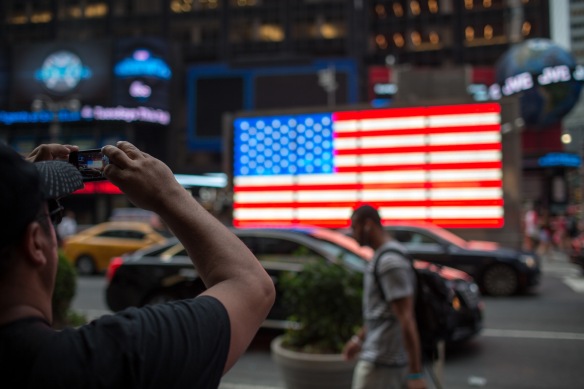 Fact eight: One New Yorker in a carnival-sized top hat keeps shouting “I’ve got hair under this, I’ve got hair under this!” while banging his fists on a hairdresser’s locked door. Another New Yorker offers some helpful tips on how to stop aging caused by sin. A third New Yorker promises $750,000,000 to the person or persons who will expose the FBI for putting a “poison tracking device” in his body. 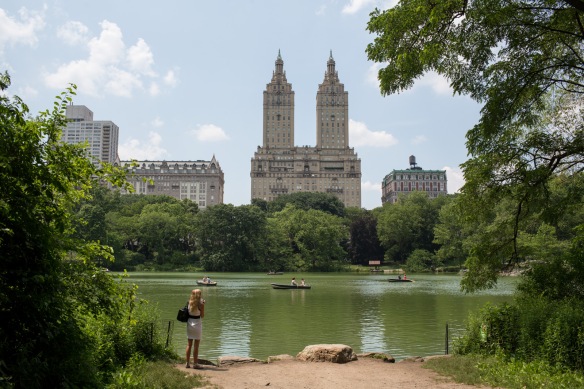 Fact nine: Looking for a place to piss and have a few more beers, I stumbled upon the stomping grounds of late photojournalist Tim Hetherington. The place called Half King is co-owned by Sebastian Junger, the author and filmmaker who collaborated with Hetherington on the Afghanistan verite documentary “Restrepo,” according to the LA Times.

Fact ten: I’m slowly growing accustomed to your boisterous manners. I think we will get along nicely, America. 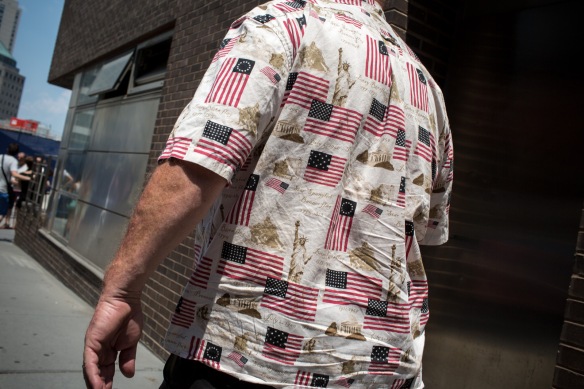 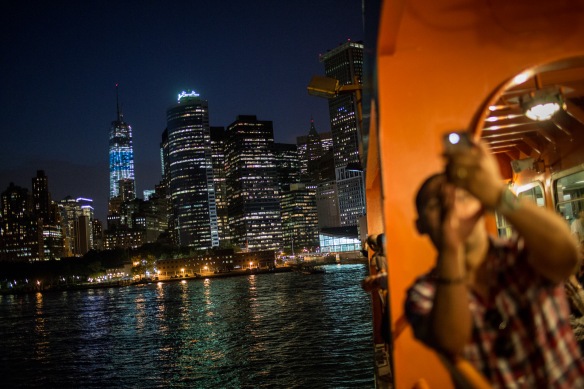 Tourist on the Staten Island Ferry

BTW: In the blog piece The Tourist and The Tulip I explain some of my motivation for blogging on this trip.

How do you make a tiny anemone look like it’s leaning nonchalantly against a wall with arms crossed and a clever smile? 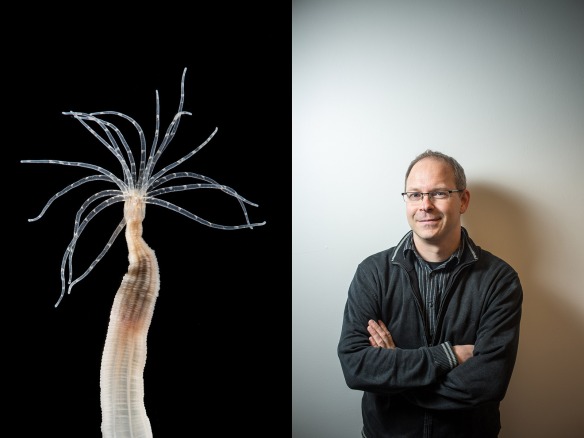 Odd couple. The model organism and the molecular biologist

Conceptually relevant portraiture of scientists is a tough discipline, which often ends in horrible clichés and/or tragedy. Do a google image search for the term “scientist” – then try not to gouge out your eyes with a broken test tube.

I do quite a lot of science portraits, I have done it for years – and I still find it really difficult to produce consistently interesting results which don’t rely on clichés or cheap gimmicks. With some clients, and especially the annual report assignments, the job tends to centre around the same type of research, the same people, the same labs year after year. 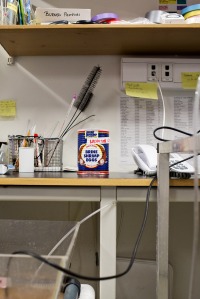 Some months ago I was hired to make a portrait of the molecular biologist Fabian Rentzsch for the annual report of Uni Research. I’ve taken Mr. Rentzsch’s portrait at least once before, and the lab setting of rows upon rows of small tanks with model organisms were very similar to those that had featured prominently in other environmental portraits for the same client. So I was looking for a drastically different solution.

Then I had the incredibly stupid idea of posing the scientist and his model organism in the same manner for a double portrait. Stupid because trying to coax the Nematostella Vectensis, a creature just 15 mm (half an inch) long, to do as you tell it just ain’t especially easy. And accidentally sucking it (and its sibling!) into the pipette you’re using to manage the Petri dish studio doesn’t help its mood. But with time comes results. Time and treats that is. Now who wants a live brine shrimp egg? Do you want a live brine shrimp egg? That’s a good boy! 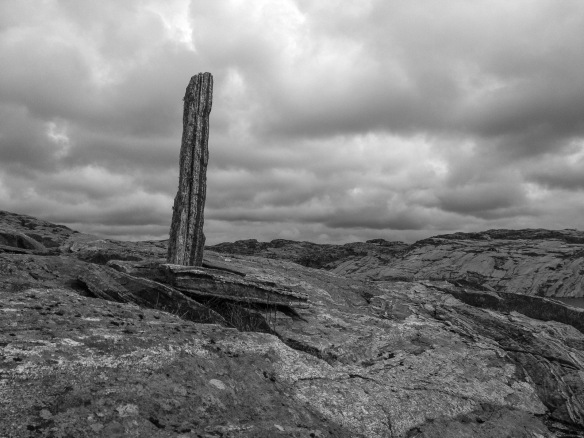 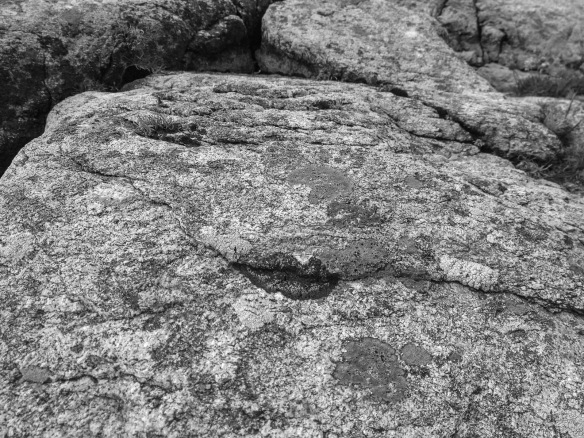 Wooing lichen, aka the flirting fungus 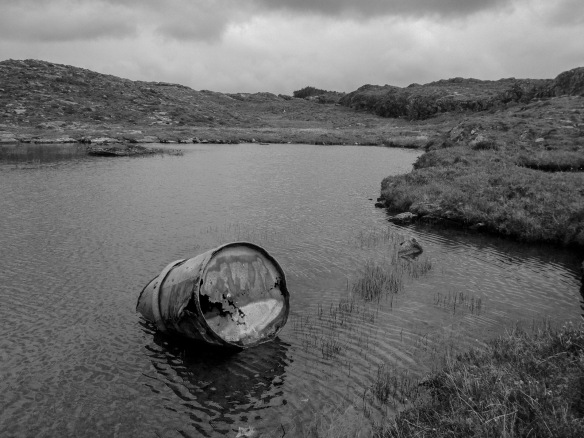 (Goltic is an adjective meaning of or relating to the area known as Golten outside Bergen. It’s a place with rocks, water and sheep)

Ferries are the dominant species in Norwegian fjords. But sometimes, if you’re really lucky, you may actually stumble upon a bridge.

This is the Hardanger Bridge. It’s still under construction, but when it opens later this year, it will be one of the longest suspension bridges in the world. The towers, reaching over 200 meters, are also the tallest structures on the Norwegian mainland. Luckily there was a service elevator taking me to the top, so that I wasn’t too tired to be terrified when I got up there (actually they are so tall that the height becomes an almost abstract thing – thus it’s not really as frightening as it may look. But still).

These pictures, commisioned by the magazine Tekna, were taken last autumn. Yesterday they got an honorary mention during The Norwegian Specialized Press Association’s award ceremony. 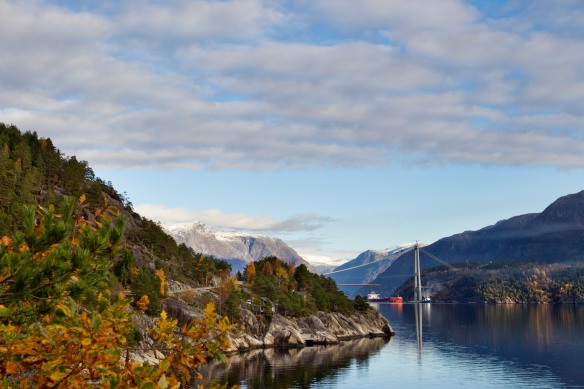 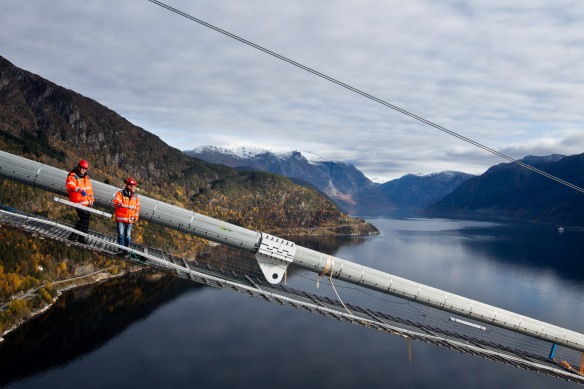 Over waters. Not very troubled. 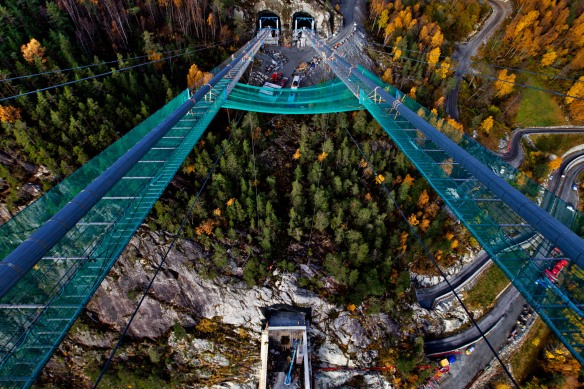 Over land. Admittedly, I felt a bit more troubled here. 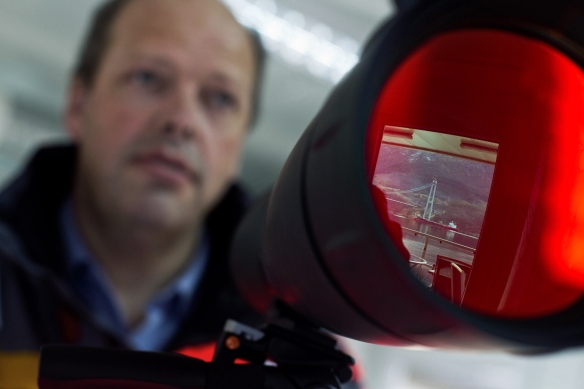 Not ready for traffic.

Once a spinning mill, then a business school, soon to be abandoned.

I don’t think I ever did a shoot there without getting lost somehow. Being a former spinning mill, the so-called Merino Building is a maze of confusing mezzanines, spiral staircases, back doors and outdated signposts. For close to 40 years, this was part of the Norwegian School of Economics. Now both students and staff are moving into a new building on the main campus, leaving the old mill behind. I was commissioned to make a series of pictures before all activity ceased – and immediately got carried away, spending several days loitering in the hallways, disturbing students in their exams and discussing the concept of Buddhist Economics and homemade Scream pastiches in the academic realm.

These are the Merino files. 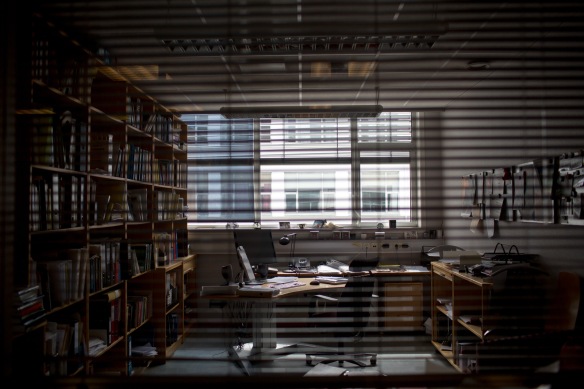 The ethics professor. Knut Ims and his Scream pastiche. 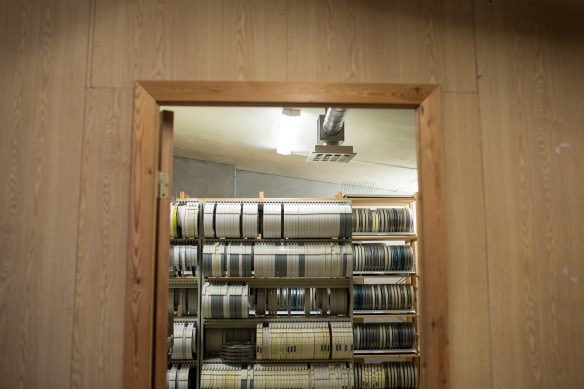 Funny in Norwegian. Not untranslatable. But I’m lazy. 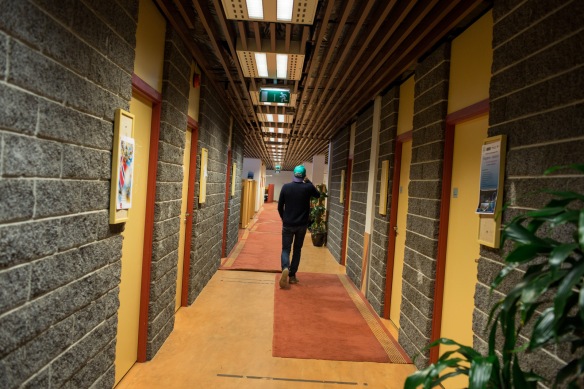 The manager. Nils Netteland in his office.

Is Beatle Fifth a good name for a baby girl?

Are dimensions a fundamental property of the universe or an emergent result of other physical laws?

How long is a sausage?

What Would Devo Do?

The phrase “What would Devo do?” (often abbreviated to WWDD) is often used as a personal motto for adherents of new wave. The phrase is a reminder of their belief in a moral imperative to act in a manner that would demonstrate the love of middle aged men wearing funny hats through the actions of the adherents.