Ølen. The rig “West Alpha” as seen from a souvenir shop. The story of Norwegian oil is often referred to as a fairy tale

They call it “the billion mile.” Along a short stretch of road between Ølen and Vats in western Norway, in a municipality with a population less than 10,000, you find several major businesses, some with revenues well into the billions of NOK. 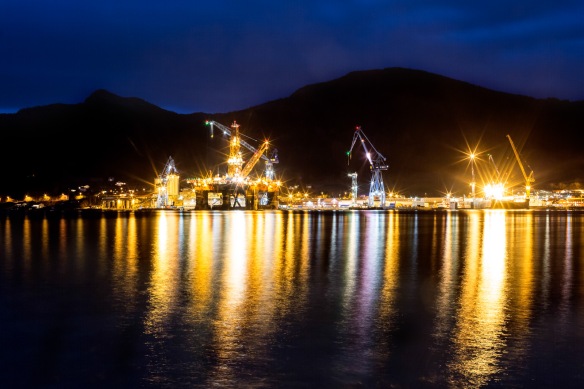 Ølen #2. Rigs are repaired, money is made. Usually

Most companies are connected to the oil service industry, making the entire community vulnerable to changes in the business cycles of the petroleum industry at large. In boom years, outside workers flock to the area in such numbers that one oil consultant firm even had to establish its own construction company to build housing for their new employees. That’s good for the local economy, obviously, with the town bar (smalltown bars are always good business barometers) reporting most nights as good nights. But that was then.

A few weeks ago a journalist from the Norwegian Business Daily and I visited the area to see how lacking investments from the oil industries affect the community at large.

We visited the bar in question and that night the house band played to a room empty but us. Walking through the main street we saw a few closed down stores, a bunch of cats, but no people except for one kid doing car repairs, wishing to leave the place behind.

Ølen #4. Behind the shipyard temporary housing units reach far into the hills

This is not recession as such. Norway has yet to take a hit anywhere as large as the rest of the world. But when the oil price remains steady for the third year in a row while costs increase ten per cent annually, big oil spends less on new investments. The local rig repair company, which at one time filled the hills above the yard with temporary housing units to accommodate foreign workers, is now lacking orders and has had to temporarily lay off a fifth of its employees.

So not a recession. More of a post-boom-hangover. Still, in a small place, you tend to notice things like that.