At a kid’s grave you leave toys and teddys. What do you leave at your dog’s final resting place? Tennis balls of course!

Trench dogs. Proper canine war heroes dead of exhaustion after pulling 40 wounded men off of a battlefield. Pups having been too brave in the Paris traffic. Also some cats. And a horse. A chicken even. Yes. And a monkey.

I try to visit at least one graveyard on each trip when travelling. Usually I end up on war cemeteries, like Arlington or Douaumont, but sometimes something special shows up, like Moscow’s Novodevichy Cemetery. Or this.

This. This is peculiar. The place is silly and sombre at the same time. A completely over-the-top thunder storm set the mood when we visited (at what was probably much the same time as I was admiring the tomb of Bibi the Bichon Frise, a lighting strike at another Paris park electrocuted eleven children at a birthday party. Jeesh).

An old, deaf cat lady at the cemetery who obviously couldn’t hear the thunder still felt something thunder-y in the generel atmosphere and tried seeking my advice on whether to take shelter. My French being limited to mispronounced high school-Victor Hugo-highlights, I tried hand-signalling, failed miserably and took a taxi to the Deyrolle taxidermy showroom where I fell in love with a stuffed platypus valued at €22.500. 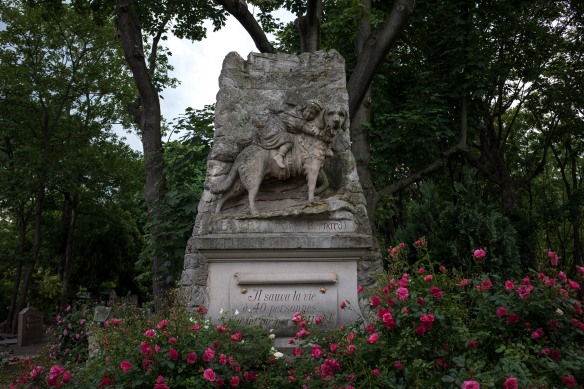 Backstory: My girlfriend tried ordering an Über for us, but the driver who obviously hadn’t heard of this place before refused to believe there was such a thing as a dog cemetery in Paris. So when my girlfriend was tired of repeating “Cimetière des Chiens” to a man who seemingly thought she was trying to say something else, she decided to drive the point home by barking at him. 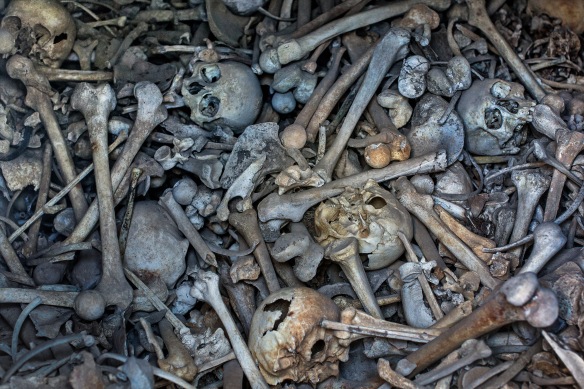 There died a myriad,
And of the best, among them
– Ezra Pound

Today marks the 100th anniversary of the beginning of one of the most costly battles in human history: the Battle of Verdun. Some 300,000 died over the course of 300 days. Another half a million were hurt or lost, all in a battlefield covering less than 20 square kilometres.

I visited Verdun last summer. I saw the village of Douaumont, or what was left of it: a forest, with inscribed stones indicating where houses had once stood. The rest had been reduced to rubble by months of continous artillery fire. More impressing was the graveyard and the mausoleum.

And on top of that hill: the mausoleum, the bone house. Built over those not identified. Through small outside windows you look in on the skeletons, the bones, of 130,000 people, combatants of both nations. 130,000 men! The population of a small city, reduced to skeletons, in heaps. 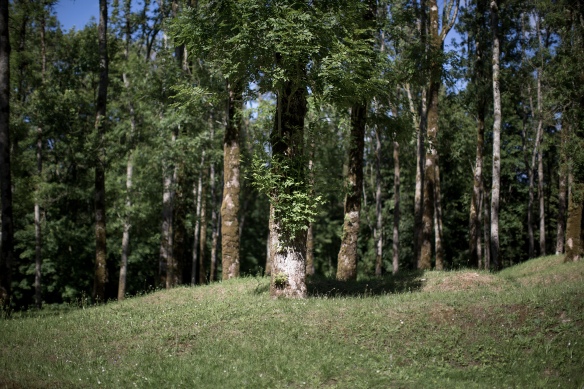 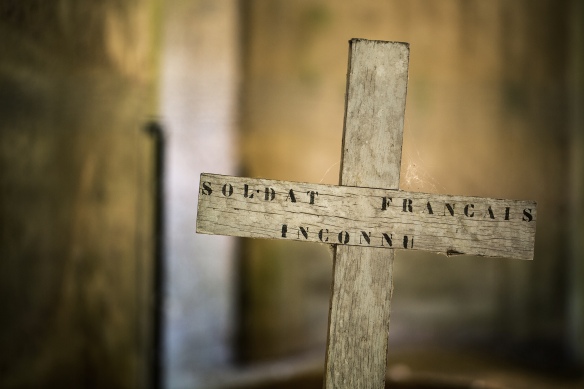 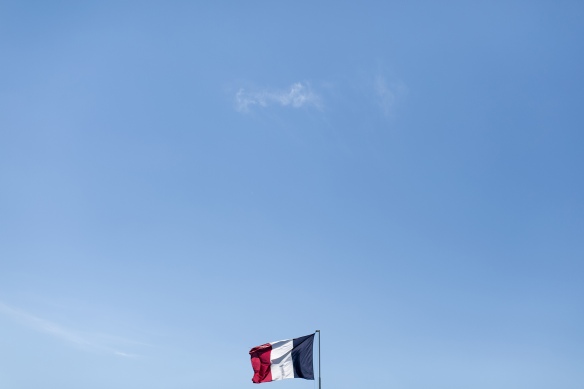 “For centuries, everyday existence in Russia was a strenuous battle for survival; the life of the common Russian was grueling, and worry became entrenched on their face as a permanent reflection of their hardship.”

– From the WikiHow-article “How to Understand a Russian Smile” 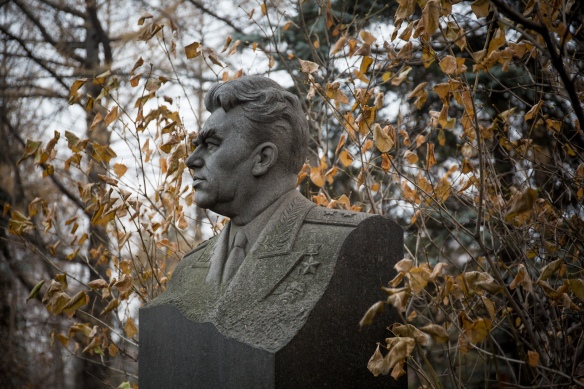 Russians do supposedly smile – just not at strangers. Spending a vacation week in Moscow recently, that ocean of faces void of any emotion made me want to make a series of stony-faced Russian portraits. Seeing that there really wasn’t time for it – and that I don’t speak much Russian either – I choose not to, but turned instead to a different set of stone faces: those of proper stone.

These are photographs from the Novodevichy Cemetery in Moscow. 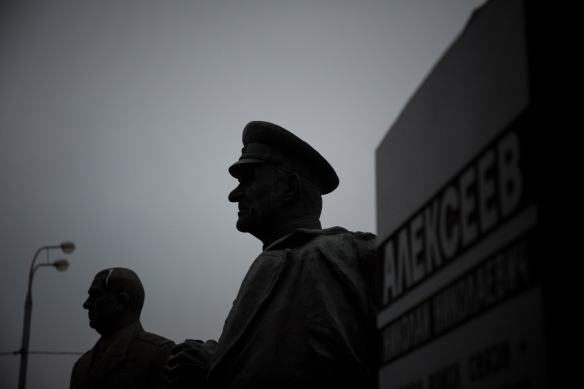 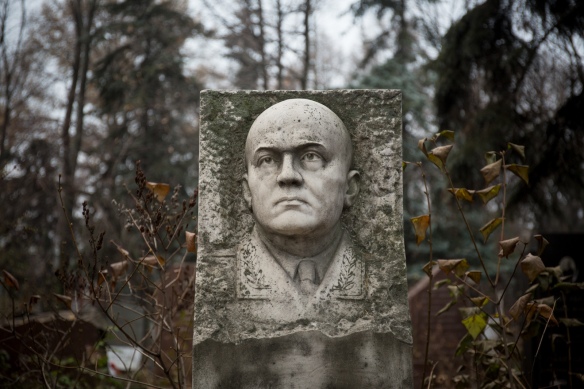 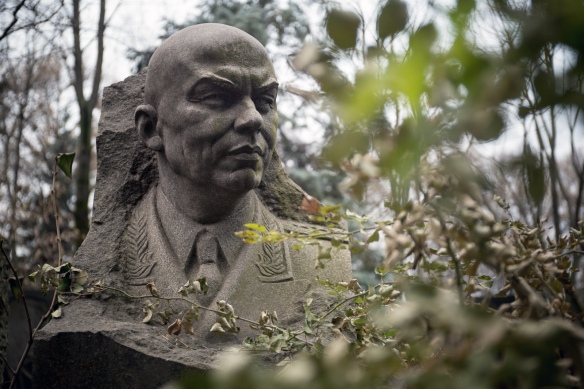 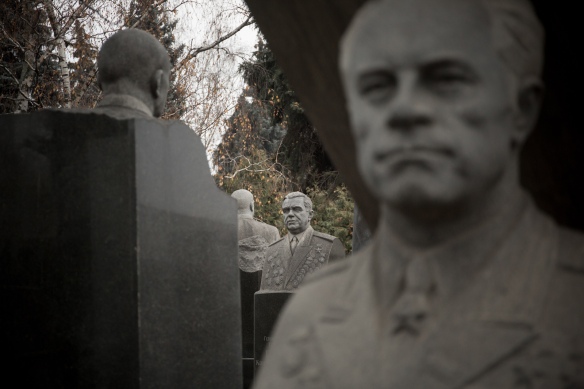 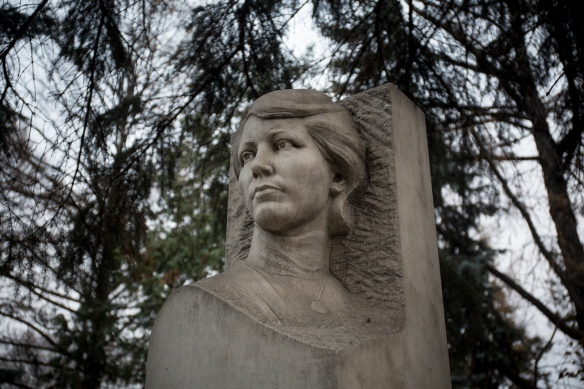 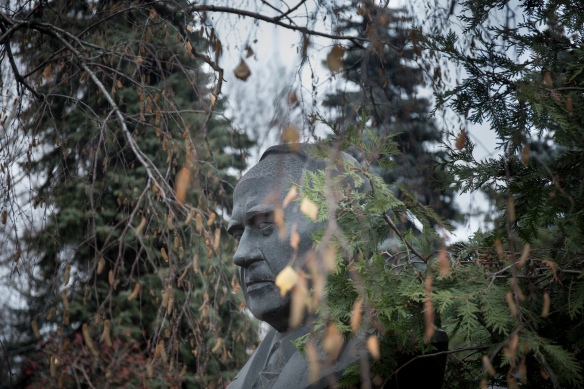 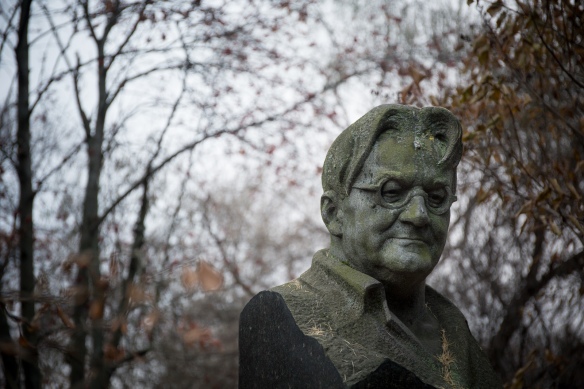 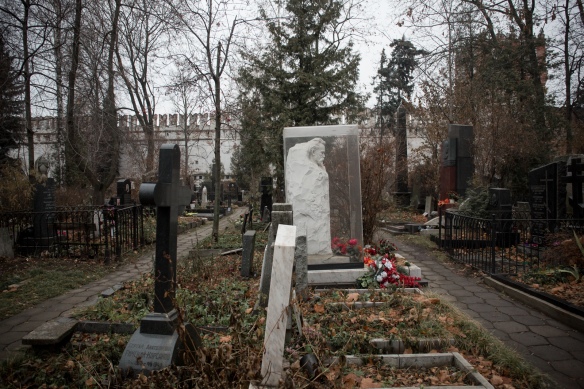 And of the best, among them. But sweet and right it ain’t. 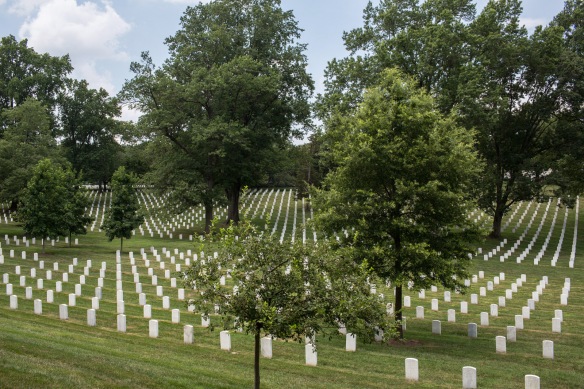 You walk among the dead of the Civil War, of World War 1, World War 2, the Korean War, the Vietnam War, the Gulf War, Afghanistan, Iraq. Somewhere on the grounds a funeral is taking place (it has to be; 27 are conducted each day). Does it feel like a cemetery? More like an endless garden of mad, beautiful horror. It’s eerily quiet, overwhelmingly sad, the July heat close to 40 degrees drains your body, the sheer endlessness of graves drains your heart. 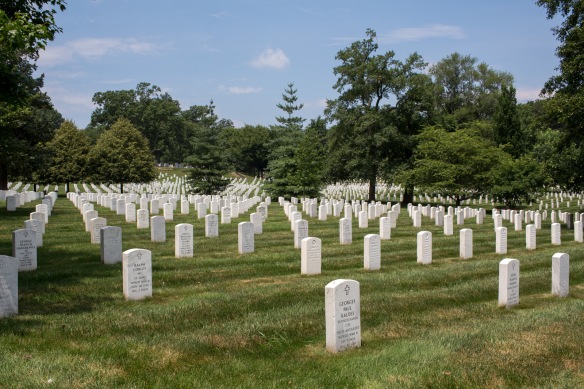 One point three million Americans have died in US’ wars since the birth of the nation. A quarter of those are interred on the 2.5 square kilometres of the Arlington National Cemetery in Virginia. Dulce et decorum est pro patria mori says the inscription over the rear entrance to the Memorial Amphitheater. That’s latin, a line from the Roman poet Horace’s Odes, and it translates to “It is sweet and right to die for your country.” Well, it ain’t. Certainly not as a matter of course. 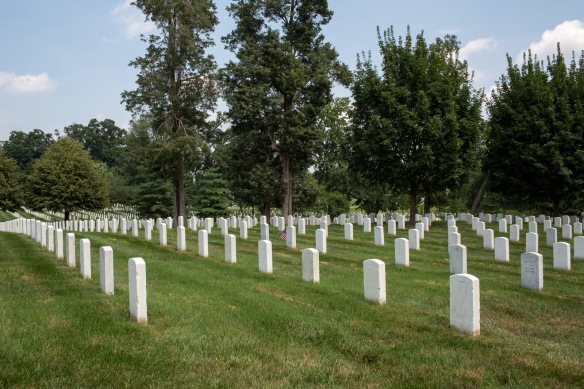 There are good causes and bad causes, but more often than not I hold with German playwright Bertolt Brecht: “It is sweeter and more fitting to live for one’s country.” Of course, that quote of Horace’s is a recurring theme in anti-war poetry. Wilfred Owen called it “the old lie.” And Ezra Pound wrote 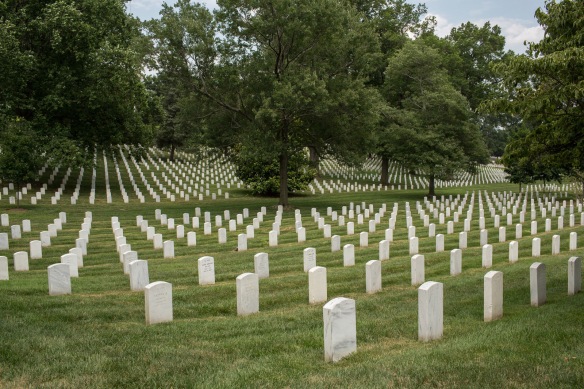 Those lines are part of the much larger poem called Hugh Selwyn Mauberly, published in 1920, where especially parts IV and V mark Pound’s complete outrage at and disillusionment by World War 1. But these disillusioned laments are good parables for later wars of great tragedy as well.

It’s a beautiful, albeit chilling read.

walked eye-deep in hell
believing in old men’s lies, then unbelieving
came home, home to a lie,
home to many deceits,
home to old lies and new infamy;
usury age-old and age-thick
and liars in public places.

fortitude as never before

frankness as never before,
disillusions as never told in the old days,
hysterias, trench confessions,
laughter out of dead bellies.

There died a myriad,
And of the best, among them,
For an old bitch gone in the teeth,
For a botched civilization,

For two gross of broken statues,
For a few thousand battered books.