* Not to be confused with a 1988 Jean Claude Van Damme-flick. 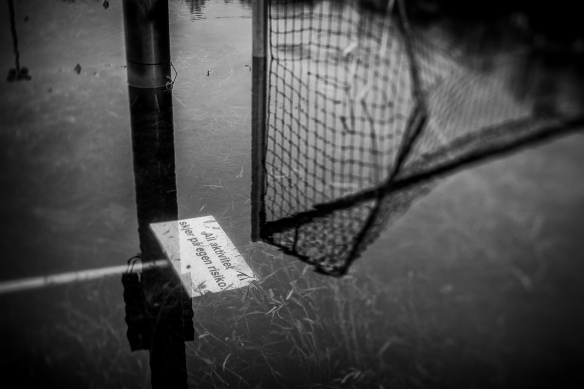 Photo by Eivind Senneset (© All rights reserved) / Flood #2 (Sign reads «All activity at user’s risk» – which is kind of silly – except the fact that it is submerged under 40 centimeters of water – which gives it a sort of legitimacy. Anyway.)

Photo by Eivind Senneset (© All rights reserved) / Would you look at that total absence of spring?

And umbrellas, also. (A short series on tourists trying to keep dry while visiting a wet city.) 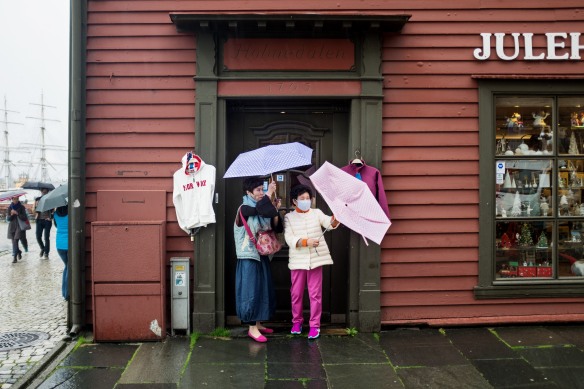 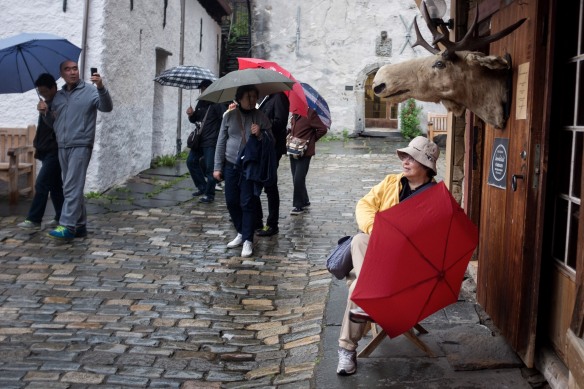 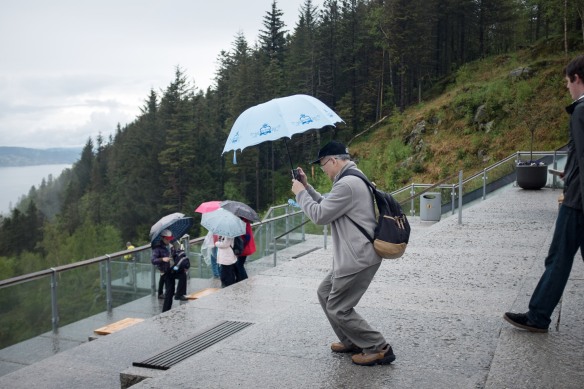 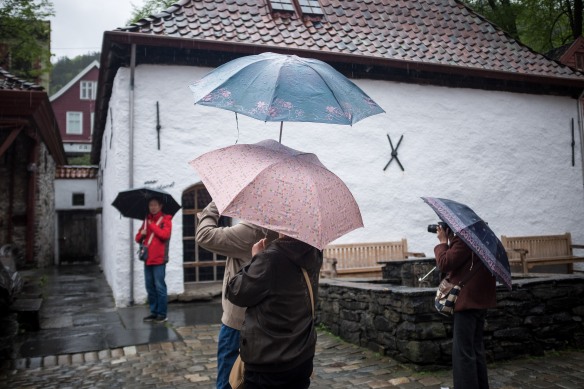 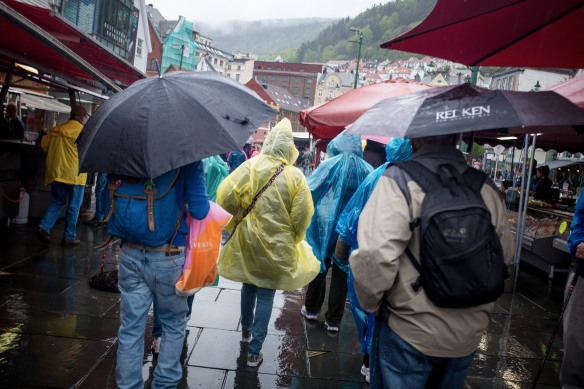 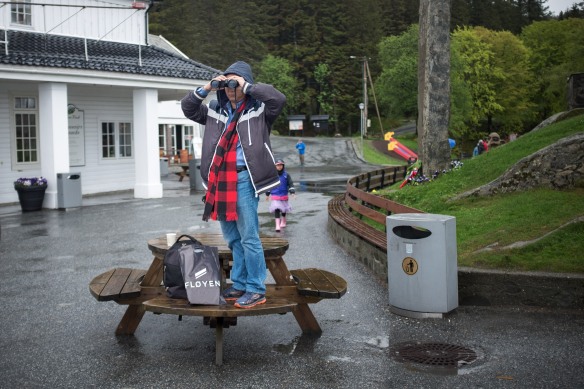 Gone with the wind #1 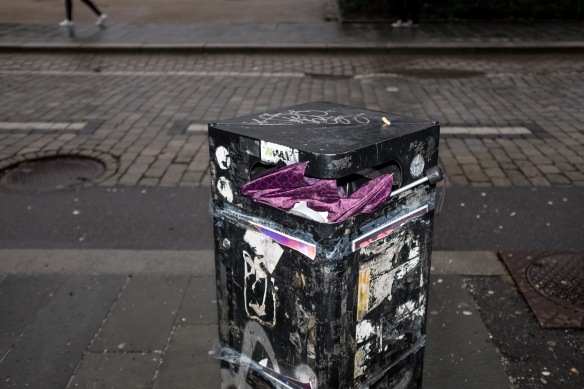 Gone with the wind #2 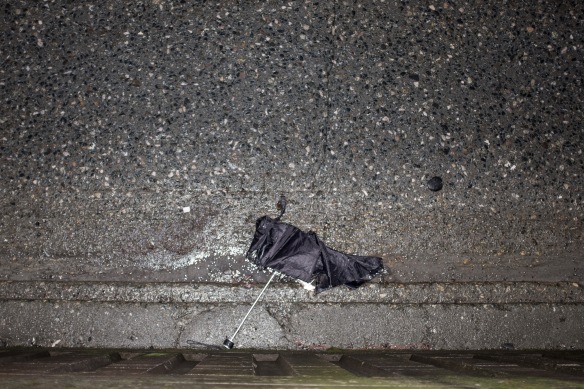 Gone with the wind #3

Gone with the wind #4 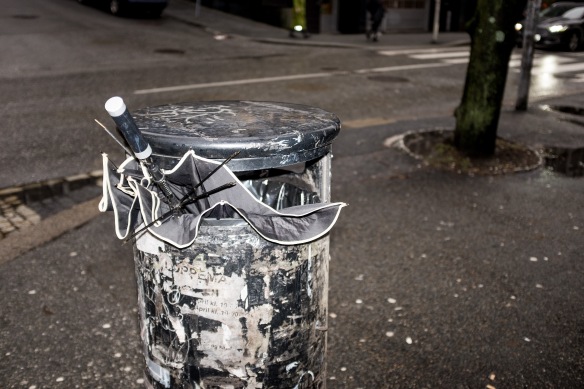 Gone with the wind #5

Gone with the wind #6 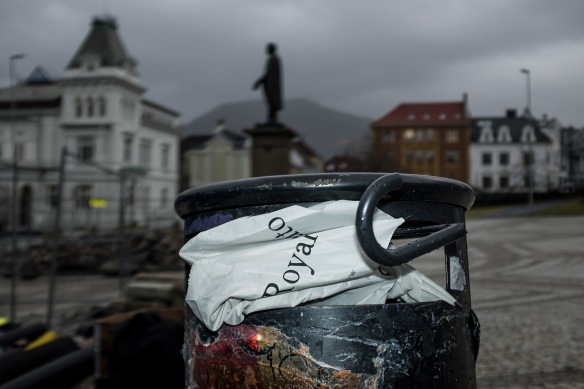 Gone with the wind #7

Gone with the wind #8

The sun shines, having no alternative, atop the clouds. Below is misery.

The weather is the fallback topic of any conversation gone stale. I don’t believe this blog has gone stale quite yet, but I’m still writing about the weather. Go figure.

Here, west of the mountains, the default weather is either “raining” or “inbetween two showers” – the latter something we actually have a dedicated word for in Norwegian: “Opplett” means “yes, it is actually raining. Just not right now.”

Mt. Ulriken in July 2011. Compare with the official tourist view.

Not long ago it was “opplett” for almost 30 days straight. Which left us in a bit of a panic once the rain started again, as we feared that we had used up all the sunny days allotted to us this year. This is nonsense of course, except that so far it has proven true. Now it is the third of May and it is … snowing? The proverb “April showers bring May flowers” could possibly be corrected to “April showers bring May snow and dread and bollocks to all your optimism: spring is dead.”

The last week of March I was in Copenhagen and Roskilde photographing for the upcoming summer edition of KLM’s inflight magazine.

Roskilde in March. Indistinguishable from summer.

Shooting a summer story at this time of year is always difficult, but this time Denmark experienced its coldest month of March in 30 years. I think I spent three hours on Amager square just waiting for a couple of hipsters in seasonally neutral attire to pass. And there really aren’t that many hipsters too cool to be cold when it’s ten below. 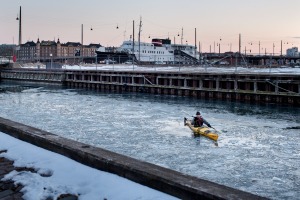 This is a Danish icebreaker.

This is of course no joking matter (well, hipsters in ten below is, but the climate isn’t). This spring chill is not an isolated Nordic phenomenon, but something affecting much of Europe and the Southeast U.S. And that even in a year (yet another) with global March temperatures reaching record highs. These two facts are probably linked. As The Guardian writes, scientists link frozen spring to dramatic Arctic sea ice loss.

The basic science of it being this, according to the article: Because of global warming, sea ice is now 80 per cent less than it was thirty years ago. This ice loss adds heat to the ocean and atmosphere thus shifting the position of the high altitude jet streams that govern most weather in the northern hemisphere. This shift allows the cold air from the arctic to plunge much further south and screw up our spring.

Now, I have never really been prone to swinging moods because of bad weather as such – but I have spent much of my adult life in a state of a mild, constant climate depression.

And the combination really gets me.